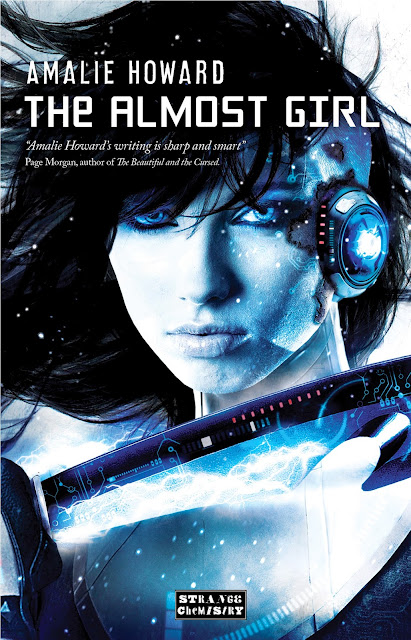 Seventeen-year-old Riven is as tough as they come. Coming from a world ravaged by a devastating android war, she has to be. There’s no room for softness, no room for emotion, no room for mistakes. A Legion General, she is the right hand of the young Prince of Neospes, a parallel universe to Earth. In Neospes, she has everything: rank, responsibility and respect. But when Prince Cale sends her away to find his long-lost brother, Caden, who has been spirited back to modern day Earth, Riven finds herself in uncharted territory.

Thrown out of her comfort zone but with the mindset of a soldier, Riven has to learn how to be a girl in a realm that is the opposite of what she knows. Riven isn’t prepared for the beauty of a world that is unlike her own in so many ways. Nor is she prepared to feel something more than indifference for the very target she seeks. Caden is nothing like Cale, but he makes something in her come alive, igniting a spark deep down that goes against every cell in her body. For the first time in her life, Riven isn’t sure about her purpose, about her calling. Torn between duty and desire, she must decide whether Caden is simply a target or whether he is something more.

Faced with hideous reanimated Vector soldiers from her own world with agendas of their own, as well as an unexpected reunion with a sister who despises her, it is a race against time to bring Caden back to Neospes. But things aren’t always as they seem, and Riven will have to search for truth. Family betrayals and royal coups are only the tip of the iceberg. Will Riven be able to find the strength to defy her very nature? Or will she become the monstrous soldier she was designed to be?

We’re at an impasse, staring at each other with stubborn fury. I’m not above using force to get my way but Shae’s just taken out two Vectors. Alone. I’m not about to make any rash and stupid decisions about her combat skills or apparent exhaustion. The silence hangs between us like an impenetrable wall as we stare at each other across the five feet that could well be an abyss between us. After a few tense minutes, Shae clears her throat.

“Do you remember that day? When I left?” Shae asks and I give the barest of nods. It’s a day that etched into my memory so deeply that I couldn’t forget it if I tried. “I wanted to take you with me but you wouldn’t go,” she says. Her laugh is empty. “You remember what you called me?”

She doesn’t have to say it; we both know what I said.

“That was the day I realized that you were your father’s daughter. He robbed you of anything close to love,” Shae says. “You chose to stay with him out of fear for him than out of love for me. He owned you then, and he owns you now.”

“He used to say that I could never be a killer because I was too emotional. Said I loved too much. How can someone love too much? He said I was too much like mom. Soft. I proved him wrong even though I died a little bit inside every time I took a life.” At Shae’s words, my eyes feel like there’s sand behind them, and a boulder settles in the pit of my stomach. “But he was right about you, wasn’t he? The stone cold sister? The one who wouldn’t be torn by emotion, the one who kills without feeling a thing? Servant to the monarchy… obeying orders without question… He’s made you into their killing machine. So what? You’re going to kill me now, Riven?”


Enter for a chance to win the
FIRST ARC GIVEAWAY of THE ALMOST GIRL by Amalie Howard!

Seventeen Magazine Summer Club author Amalie Howard grew up on a small Caribbean island where she spent most of her childhood with her nose buried in a book or being a tomboy running around barefoot, shimmying up mango trees and dreaming of adventure. 22 countries, surfing with sharks and several tattoos later, she has traded in bungee jumping in China for writing the adventures she imagines instead. She isn’t entirely convinced which takes more guts. She currently resides in New York with her husband and three children.

She is the author of The Aquarathi series from Harlequin TEEN (Waterfell and Oceanborn), The Almost Girl from Strange Chemistry, Alpha Goddess from Sky Pony Press, and Bloodspell from Langdon Street Press. She is represented by the Liza Royce Agency.


Other books by Amalie Howard