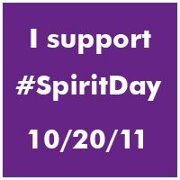 It was created to send a message of support to LGBT youth and stand up against bullying.

We have all experienced bullying in one form or another, even in our own Fandom.

Let today be a day of hyper awareness of our actions and words. Let us remember those who continuously suffer bullying because of differences, sexual orientation, medical impairments, mental disabilities, or those targeted because of easy access that anonymity provides.

So let today be a reminder for us all to think before we speak, or think about a review or a remark you are leaving for a writer. Let us try to remember, "do unto others as we would do unto ourselves."

Anonymity does not give you leeway to attack, it only makes you a coward. Picking on someone because you can is wrong. There is no explantion to be had for those actions.

And for those parents with children with special needs, you are not alone, there are resources and help out there.

Always a shoulder for you to lean on, an ear that will hear you, a voice that will speak for you, a light at the end of every tunnel you travel...


Bullying and Autism Spectrum Disorder
Bullying has been identified as a major problem for children on the autism spectrum who, because of their social deficits and other challenges, are believed to be especially vulnerable targets. Children with ASD may be harassed not only in the typical way, but also when a bully purposely "triggers" an affected child’s meltdown.

Being the victim of a childhood bully can have a lasting impact, including depression and diminished socioeconomic status, into adulthood.  Many adults who were once victims of bullying vividly recall the feelings of intimidation, the sometimes-daily battering of self-esteem. Many also recall the hands-off attitude that used to be common among teachers, principals, and other adults.

Fortunately, bullying, which was once considered a normal and unavoidable part of the schoolyard landscape, is now viewed as a much more serious matter.

The issue of bullying may be particularly worrisome for parents of children with an autism spectrum disorder (ASD) as bullying and social exclusion are not unusual experiences, particularly for children with medical or developmental issues, and it is clear that isolated children who lack social skills are at increased risk for bullying.

Children with ASD, with their characteristic social deficits, are especially vulnerable. It is not hard for parents of children on the autism spectrum to imagine the scenarios: their child's inability to "read" the social signs that someone doesn't have her best interest at heart; the eagerness to please that can make him easy to manipulate; the tendency to say what he thinks without a full understanding of consequences.

How can a child recognize a potential bully when he lacks the ability to see so many of the clues, the hard edge of mounting frustration or sarcasm in the tone of voice; the smug look of a popular girl asking him out on a date, on a dare; the "friend" who persuades him to unknowingly commit an offense that brings on discipline from the teacher?

"The inability of children with autism to stand up for themselves and the ease with which they can be reduced to tears of rage or frustration by others make them 'perfect victims,' often they are unclear if they are being bullied, or if what is happening in their own fault...."

Because their disability is less obvious, and because they are often placed in mainstream classrooms, children with high-functioning ASD may be at particular risk. In one New York study, parents completed questionnaires about how their children with Asperger syndrome fared with their peers in school. Some reported that their children were "egged on," with one child told to "run like a bull," only to be taunted that he was a freak when he complied; how another child's picture on the bulletin board had the eyes scratched out; how yet another child who had endured prolonged bullying expressed a desire to be "put in the street and run over."

Not recognizing genuine bullying can make a child with ASD a likely ongoing victim. Asperger expert Tony Attwood asserts: "Children with Asperger Syndrome have several problems with regard to reporting being a target. They have impaired Theory of Mind abilities; that is, difficulty determining the thoughts and intentions of others in comparison to their peers. They may not intuitively know that the acts of other children are examples of bullying. They can sometimes consider that such behaviour is typical play and something that they have come to accept as yet another confusing behaviour of their peers."

To further complicate matters, children with ASD also may have trouble distinguishing bullying from good-natured teasing. When all parties are having fun, it's not bullying, a concept that may be difficult for a child with ASD to grasp. A child who overreacts and bursts into sobs or too easily assumes malicious intent and retaliates may soon be left out of the very "child's play" that might help her learn the skills that will help her fit in. A child who doesn't recognize that the same behavior that was funny only moments ago has turned irritating may prolong a behavior to the point where it provokes others.

There are some signs parents can look for to determine when it may be time to contact the school about potential bullying. Parents of a child with ASD who has become a target may notice that possessions have been lost or damaged, or that clothing has been torn, according to Attwood. They also may notice signs of physical injury, such as bruising, or signs of anxiety, such as stomach aches, problems sleeping, avoidance of school, or other behaviors that may be associated with bullying.

In addition, some children with ASD may respond with aggression when they are targeted by a bully.

Parents and school staff need to be aware of the issues that can arise for the student with ASD who is struggling to interpret the social world and make connections with other people. This understanding is especially crucial if the student faces disciplinary action due to his or her behavior toward other students.

In the United States, the Individuals with Disabilities Education Act (IDEA) does provide some protection for students with ASD, and a child with an Individualized Education Plan (IEP) is entitled to a "manifestation review" if his or her behavior is about to result in suspension, expulsion, or a change of placement. If such a review demonstrates that the child's conduct "was caused by, or had a direct and substantial relationship to, the child's disability" or "if the conduct in question was the direct result of the local educational agency's failure to implement the IEP," the child must be returned to his school program (unless his or her parents want a new placement) with a new or revised functional behavior program in place.