To the outside world, they look like American Royalty, giving to charities, feeding the homeless, rebuilding the city. But behind closed doors is a constant battle for dominance between two Bosses, cultures, and hearts.

Ruthless People is a romantic crime fiction set in modern day Chicago, and follows the life and marriage of Melody Giovanni and Liam Callahan—rivals by blood and leaders through fear.

Their marriage, arranged by their fathers in hopes to end years of bloodshed between the Irish and the Italians. Liam believes he’s getting a simple-minded wife, one he can control, one who bends to his every need . . . the complete opposite of Melody. She knows exactly what type of man he is, and would rather die than give up the power she has spent her life building.

The Mafia of the past has evolved, and with rival bosses gunning for them, Melody and Liam will have to learn to work as one to take down those who stand in their way.

I think the key to writing any good relationship is to write your dream one. It may seem weird but I wrote the relationship between Melody and Liam based on how I would want my own relationship to be. I find myself like Melody, love isn’t something I’m used to. So I would like a guy like Liam; some one that can be strong and passionate enough to draw the emotions out of me. So I just imagined myself in Melody’s place and let the words flow. There relationship develops over the progress of the novel in many different ways. There will always be a push and pull between them. Melody is ice but Liam warms her up and vise versa. I think in away they enjoy fighting with each other. 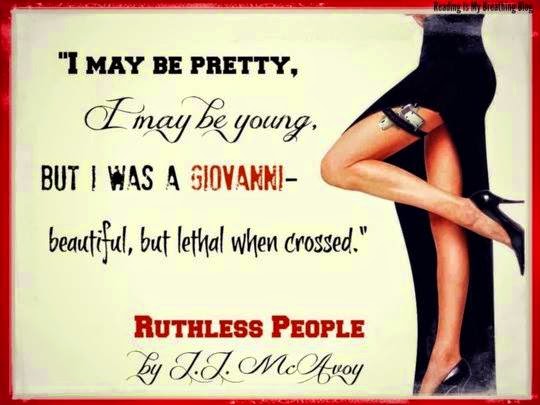 J. J. McAvoy first started working on Ruthless People during a Morality and Ethics lecture her freshman year of college. X number of years later, she is an insomniac who has changed her major three times, and is a master in the art of procrastination.

If you ask her why she began writing, she will simply tell you “They wanted to get their story out.” She is currently working on her next novel .