Book Blast & Giveaway | Pulling Me Under by Rebecca Berto {@rebeccaberto} 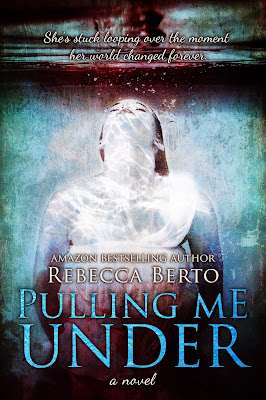 Paul was Katie’s rock for thirteen years, but then she watched him die.


By day, she is left with her daughter Ella’s questions about where Daddy went, and at night she's consumed with nightmares of the moment he died. It isn’t long before Katie’s mother hints that her volatile lifestyle and developing drinking habits are no way to raise a little girl.


Through it all, her and Paul’s best friend, Liam is there. Grieving the death of both husband and friend, the time they spend together seems more intimate these days, and Katie soon stumbles into taboo territory: Liam might be in love with her.


Air. Space. Thinking time. That's what she thinks she's getting when she stumbles upon that party. In the morning, in a strange bed, she can’t remember the night before.


Pulling Me Under is raw in its brutality of love and pain, with slow-building suspense to a heart-stopping conclusion.

Purchase Pulling Me Under:
Amazon US | Amazon International | Barnes & Noble

I wake up in my bathtub.
Liam is by my side. His arms are tense from holding his weight over the rim. When he exhales, I suck in warm air. His air.
He sees me wake and falls back against the tiled wall behind him, lacing his fingers as a barrier between the wall and his head. Crunch. He doesn’t react when he hits the wall, as if his hands haven’t protected his skull. Not even a flinch.
Thankfully, his eyes are closed, which makes me feel less self-conscious. I mean, I don’t remember a period of time without him—my kinder years, primary, secondary school—but it’s easier to think without scrutiny.
I’m not sure how long it takes, but soon enough I see he’s wearing the blue hoodie. Did he really leave it here or did he put it on . . . to rub something in? His jeans are the worn ones, the ones where his knee pokes through one pant leg. Smirking, I notice he’s still wearing Ella’s Mickey Mouse watch. The one she insisted he use.
I try to form a memory but all I see are lined-up red plastic cups and me smashing them along a line with the ball of my heel. That’s all that comes to me. As I hit this memory, Liam opens his eyes. He’s breathing heavily, but what worries me are those blue eyes because they seem too wide. Those eyes have seen too much.
“Wha—” I clear my throat and taste something acidic, half-digested that makes my voice sound like a gurgle. I rinse out two cupfuls of water before I gulp down another two cupfuls. It’s only after the eagerness to wash out the vomit that I realize I have my boy shorts on and one of Paul’s business shirts.
And that’s it.
“What happened?” I say to Liam anyway, because I can’t very well ask “Why am I half-naked?” I’m lucky my body is thin enough to hide in this shirt. It would have been a different story otherwise.
He sits up and searches my face for a long time. His gaze is so still that a shiver runs down my spine.
“Seems you had a party, you did.”
I’m suddenly self-conscious about my gaping shirt. I pull my ankles by my side and the ends of my shirt as tight around my chest as they will go. “Was this your idea?”
Liam points to my shirt—Paul’s shirt—and suppresses a scoff. “Nah, man. I came here at, ooh,” he checks his watch and clucks, “twelve-forty.”
“And I was . . . ”
“Well and truly partied out. I missed it all. I believe you were passed out and curled up with an empty Johnny Walker bottle.” He points over there. To Ella’s bed. Just as I guessed.
I allow myself to see through the bathroom door, trying to push through the pounding in my head. Ella’s bedroom has her ponies strewn everywhere, in a way she never leaves her precious toys.
The “why” of Liam’s presence occurs after I’ve looked away. I don’t want him seeing me look back to him. I’ve had enough shame for one day.
In Ella’s bedroom there’s the suspect Johnny Walker bottle on the floor. I clench my teeth, pushing away memories, pushing, pushing, until all I think about is running.
Looking at Paul in that picture with cascading curls is worse, though, so I refuse to look at the particular section of the wall. I can’t see happy. I took away happy and I want nothing to do with it now.
I concentrate on keeping my features blank so Liam can’t read any weaknesses. He’s about to suggest I hand Ella over to someone else to for a little while—I can sense it.
I remember that things changed about a week after what happened with Paul. The first week after a sudden, terrible death is open to all sorts of reactions, but for me there’s been a disconnect. The first week, I would stare right at something as plain as a glass, and thinking back now, I can recall from my fixture on that glass I didn’t even know I was doing it. I’d get asked what I was doing that morning and I’d think it was afternoon because, surely, I couldn’t feel that tired and ready to quit the day before midday. I didn’t even know I skipped meals because hours slipped away like soap in a shower, yet my body had never felt heavier to lug around than it did then, during the first week.
The first week has never ended for me.
There are “comforting” lines, like the Do you want to chat about it, Kates? that people repeat.
Well, what do I say to that? I don’t want to talk about it. Okay?
Then I can’t remember much.
What day is it?
What am I doing in my car?
Who am I?
I shouldn’t be surprised. I transformed from a kid, dependent on my mom and dad to being “Paul and Kates”.
Never have I been just me.

Rebecca Berto is an Amazon bestselling author. She is also a freelance editor.

She writes stories that are full of heart. She gets a thrill when her readers are emotional reading her stories, and gets even more of a kick when they tell her so. She’s strangely imaginative, spends too much time on her computer, and is certifiably crazy when she works on her fiction.

Rebecca Berto lives in Melbourne, Australia with her boyfriend and their doggy.