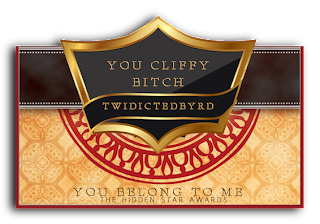 Congratulations Twidictedbyrd!
Winner of the You Cliffy Bitch Award

Today's interview was done by the lovely Ninmesarra who spoke with the evil Twidictedbyrd. And I always say evil of any author that leaves us gasping for breath with cliffies!! I hate the cliffy, but love them at the same time.
Twidictedbyrd wrote quite the cliffy with You Belong To Me.

Definitely check it out and you will understand why she is our Cliffy Bitch award winner!
But first, let's see what Ninmesarra was able to dig up with her little chat with the cliffy queen...

Ninmesarra: How did it feel to be nominated and win a Hidden Star Award?


Twidicted: It felt great to be nominated for a Hidden Star Award. We have worked really hard on our story and were thrilled for it to be recognized.
Ninmesarra: What was the inspiration behind You Belong To Me?


Twidicted: The inspiration for You Belong to Me originally came from our entry for A Love Like Fire Contest. After we wrote the one shot we decided to continue the story.
Ninmesarra: You won for You Cliffy Bitch, how in the world did you come up with SO MANY cliffies?


Twidicted: I have read so many fanfic stories that I have lost count. The stories that keep me coming back for more have cliffies. I honestly wish I knew where all of them came from but most just “magically” appear while I’m writing.
Ninmesarra: Without giving too much away, did you know from the beginning the huge change that takes place in Edward and Bella?


Twidicted: It was going to be a HEA for Bella and Edward so we knew that they would change but some of the things that showed up were not planned in advance. Sometimes I get on a roll while writing and the words have literally appeared before me. I have been known to write 3000 words in a little over two hours because
the story literally flows from me. Where Bella and Edward meet up again was planned but everything else, including some tearjerker moments literally just showed up in black and white.
Ninmesarra: How many more chapters do you see coming for the story?


Twidicted:The story is probably going to be finished in no more than 10 chapters. The chapters are outlined and sometimes I keep stuff going that should have been in just one chapter ends up in three.
Ninmesarra: When the sad day comes that final chapter of You Belong To Me is posted, should we keep our eyes out for something else popping up soon?


Twidicted: I have all kinds of plot bunnies floating in my mind. None of them are as angsty as this story. Once real life chills out and the story is finished, another story will likely appear.
Ninmesarra: Did you find it challenging to write this story since it is now moving in a completely opposite direction as it was at first?


Twidicted: It was definitely a challenge in the beginning. I am a ready of fluff and romance. Reading angst literally stresses me out, so I honestly don’t know how I am able to write it. There is definitely more angst on the way but the HEA isn’t too far away. The rest of the story really began to write itself once me made a decision that changed the course of all of our characters’ lives forever. I have cried as many tears as the readers while I have been writing these words. While the recent angst in the story line was very difficult to write, it was the only way for Edward and Bella to truly realize that they were meant to be together forever.
Ninmesarra: How did you first get into fanfiction?


Twidicted: I was reading every book series about vampires that I could get my hands on when I noticed many of the other Twi fans I followed on Twitter were reading fanfiction. I didn't know a whole lot about it in the beginning, but I clicked on a link someone posted for "The Plan" and I've been hooked ever since. I usually read a little something everyday. I have probably read close to 1000 stories in the last year.
Ninmesarra: What made you decide that you wanted to write?


Twidicted: My co-writer byrd kept telling me that as much as we read fanfic that we should try to write it. She kept looking at different contests and once A Love Like Fire contest came up we decided to make a go of it. It was extremely challenging to try to write a story with someone who was 1500 miles away but we were able to do it.
Ninmesarra: Do you only write fanfiction?


Twidicted: My whole life, I have been writing. I started out writing song lyrics and even a screen play when I was 16. I was a print journalism major in college and continued writing there. I was lucky enough to interview Mark Wahlberg when he was still a member of Marky Mark and the Funky Bunch when I was on my college newspaper staff.
Ninmesarra: You interviewed Mark Wahlberg - that is freaking awesome!
Do you do any thing in particular to set the mood when you sit down to write?


Twidicted: I have to have some kind of noise going on in the background when I write. I may play one of the Twilight movies or a Kings of Leon concert from my DVR. I may just have some songs playing randomly on my laptop. Often my dog curls up on the end of the recliner while I have the laptop on my lap writing.
Ninmesarra: If there was one piece of advice that you could give an aspiring writer, what would it be?


Twidicted: You’ve got to have fun when you are writing. Don’t get stressed if you are having a problem finishing the story or coming up with ideas. Working with an outline is also a great idea, because honestly we didn’t have one until chapter 10.
Ninmesarra: Any last thoughts, words, shout outs?


Twidicted: I would love to thank everyone who voted for our story and our amazing pre-readers and beta who have helped keep all us sane while we have written quite a wild ride.