Take What You Want by @Purelyamuse 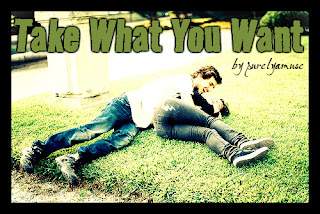 
Summary: Based on January 2012 witfit prompts. Though Bella's known Edward for years, they've just started hanging out. His crass, smelly boy self is not appealing, but his looks and charm are. How will she deal with her feelings for the gross, flirty boy?

Dirtyflirtward has crept in to my heart. Pretty much the same way Masen did, slowly and permanently.

Purelyamuse has written two very different and completely diverse characters that grab at your heart and will not let go. And like Masen Days, Take What You Want is a story that will touch every emotion and hold you captive. That's not to say there wasn't hesitation on my part in approaching the story because it is a witfit. I dislike witfit's more than drabbles. I have absolutely no patience for them. But every once in a while, I am surprised.

A loved Masen Days. I still re-read it from time to time. I decided to trust Purelyamuse's story telling ability again. I am so glad I did, witfit or not.

Take What You Want is an amazingly funny and romantic story. This is an Edward like no other. Dirtyflirtward. I mean who writes an Edward like that? Edward is utterly perfect. Purelyamuse definitely had other ideas. Her Edward is crass, obnoxious, flirty, dirty, and smelly. Literally! And you will love him instantly.

The story starts out with Edward and Bella's first encounter in class. Yes, a high school fic, but not your typical high school setting. Bella has known Edward forever and does not like him. She finds him completely obnoxious and yes, stinky...

"Hey, sweet cheeks," Edward says, patting the seat across from him.
Oh, no. Not with the nicknames again. He's ridiculous; has a name for everyone. I seem to be the lucky one, though, because they just keep coming.
His grin is wide; auburn hair wild, and I want to hit him because I don't want him. I don't. Not at all. Not even a little bit.

Edward is just so...ew! As Bella bluntly puts it and her dislike for him shows...

The bell rings, and he gathers his stuff, leaving his paper behind. Like a fool I pick it up. And scan it. At the bottom in bold, capital letters is Bella Swan?.
I run into the hall, ready to throw it at him. He's just so . . . ew! As soon as I get there my temper flares up even more as he's chatting up some sophomore, his hand on her hip. She's giggling and fawning all over him. I storm over to him and push him into the locker.
"Hell, yes!" he shouts. "Now?"
"No, not now! Not ever!" I slam the paper into his chest and walk away, throwing open the heavy doors to the main walkway.
"I'll see you at Skateland!" he calls, laughter following. "Wear something sexy!"

But as the story unfolds, you see glimpses of their attraction. Edward is blatantly attracted to Bella and let's her know every day. Bella is hesitant and confused over her feelings for him. She doesn't like him. Does not find him attractive. Or does she?

I look up into his deep green eyes, and all I see is concern, maybe even love. "You tell me what you want. You want me to get rid of her right now, I will. In fact, consider it done. She's gone, out of the picture. All I want is you."
"This is such a mess," I say, wiping my eyes and looking away.
"It doesn't have to be. We can fix this. Together, we can. I know we can."
"How? Someone will get hurt. They haven't done anything wrong," I say, throwing my hand out dramatically toward the door.
"It doesn't matter. Sometimes we try to be with someone, and it just doesn't work. Some people don't mesh. We . . ." he says, thrusting a finger between the two us, "do. You know we do."
I nod and wipe my eyes again, catching more of my tears.

Take What You Want has me laughing and cheering for these two at every update. And the lovely Purelyamuse is updating every Tuesday and Thursday, which is fabulous because I can not get enough of these two.


I am in love with Dirtyflirtward!! You will be too!! 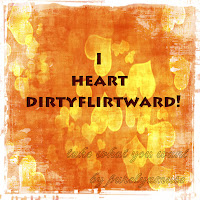