Sunday, January 29, 2012
Star Trek, Stargate Atlantis, Alien, Predator, Star Wars, V, Avatar, and X-Men. Yes, I definitely like sci-fi. But Twilight sci-fi? More importantly, Edward as a sci-fi being? Noooo, absolutely not. Edward is a vampire, he is super-natural, a paranormal being.
I don't even mind when he is written as AH, though Vampward is my preferred Edward. But a sci-fi being?? Tailward? Tentacleward?
What in all that is Holy is going on in the fandom??

Obviously some very talented writers are venturing on new paths of creativity.

It took me a while to jump on this train. I just couldn't imagine my Edward in anything but canon settings, AH or vamp. But, I finally did take a peek and was very surprised. That's not to say I am giving up my canon ways, but I have become a bit more open to something different.. 
Summary: Edward is king of a dying race, his planet torn by civil war. Bella is abducted to become his bride. From college student to Queen... Can she learn to love this strange man and help save his people? AU/OOC. Rated M for lemons, violence and mature themes.

There has been massive amounts of chats and tweets about this story. And honestly, it just didn't appeal to me. Just too different for my liking. Edward with a tail? In a sci-fi setting? No, just too weird and creepy sounding. But I finally caved to curiosity and took a peek.

Well, I loved it! Once I got past an alien Edward and the sci-fi setting, it truly is a remarkably original story. The dynamic between Edward and Bella was mesmerizing as are the supporting characters and story line. A definite stand out in the world of the fandom.

If you like something well written, original, and completely like nothing else you've read, you definitely want to take a peek at Written In The Stars. Edward and his tail, and I mean that literally, will have you gasping at every turn. Lissa Bryan is also the author of The Selkie Wife, another very different story you will want to check out.

"She looked up at the man who would be her husband in just a few hours, her heart in her eyes. "I love you, Edward."
He nodded. "I know."
She prodded gently, "You're supposed to say it back."
He looked confused. "Why? You already know I love you."
She smiled. "Because I like to hear it."
He enfolded her in his arms, his tail wrapping up around her back to rest over her shoulder. "I love you, Bella, and if it makes you happy to hear those words, I will tell you every day, every hour, for the rest of our lives."
Tears of joy sprang up in Bella's eyes and spilled down onto her cheeks.
Edward gasped. "Alice! Alice, come quickly! Bella is leaking!" 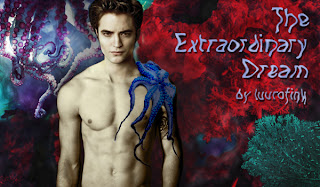 
Summary: Bella, suspended between what is real and fantasy, decides to face the man that has haunted her every moment, marine biologist, Edward Cullen. AU. Tentacleward One-shot written for and dedicated to the tentaclep0rn lovers in the fandom.


When Tencleward and his impending arrival to the fandom was being tweeted, I thought immediately...no... absolutely not. This will do nothing but scare the bajeepers out of me. But after chatting with both Luvrofink and Ooza assuring me that Tentacleward would not scare me, I took the plunge *snort*.
Well, it is an amazing story. Yes, extremely different, but truly very good. The tentacleporn was a bit different to say the least, but it was not the center of the story, merely the back drop. It was written in a dream like quality that just added to the story line, not take it over.
The Extraordinary Dream has to be one of the most sensitive and tender stories that Luvrofink has ever written, I was truly stunned that Tentacleward would touch me as he did.
My FF review:

Tentacleward was sweet. His whole personality was just endearing, especially his interaction with Poseidon. You could feel there was a secret somewhere though. And Bella, well, we all have fantasies and dreams, but that was quite the dream if it was a dream? I liked how you did that, not really knowing if a dream or not. And the ending, so touching how he and Glaucus were reaching for one another.

Definitely give The Extraordinary Dream a try. You will very pleased that you did. 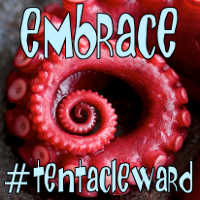 "When I rounded the corner I stopped abruptly as I took in the man before me. He stared straight ahead into the tank, mere inches from the glass, as the beautiful animal pressed its body against the thick barrier, as if to reach out to its captor. Edward's face was pulled into a sad frown as his fingertips touched the glass. He should've been smiling, celebrating the momentous occasion, but instead he looked torn and lonely."