Some Day My Prince Will Come... I can still remember as a 14 yr old girl laying on my bed and staring up at a wall filled with posters of Shaun Cassidy, Andy Gibb, Leif Garrett, and Peter Frampton. And when Cheap Trick appeared on Don Kirshner's Rock Concert, I sat fixated in front of the family's 19 inch TV imagining myself married to Robin Zander.
I read The Hardy Boys, Nancy Drew, Little House On The Prairie, and the notorious Go Ask Alice. My favorite authors were Judy Blume, S.E Hinton, Paul Zindel, V.C Andrews and J.D Salinger.


Was I obsessed? Love pop stars? Fantasize about the characters in my books? Absolutely.


Did I dream of the big white wedding with my Prince Charming? The white picket fence? A happily ever after? Did I believe in waiting for the right man who would capture my heart, romance, and flowers? Absolutely.
What 14 yr old girl didn't?
I am now a grown woman, a wife, a mother, a professional. Do I still harbor the 14 yr old obsessions?
Absolutely!
I love BDB, Scanguards Vampires, True Blood, The Heat Series, and yes, Twilight. Do I have posters on my bedroom walls? Do I imagine myself married and living happily ever after with any of these characters? No, not in the real adult world. But when I am reading I do. I get completely lost in the stories and fall in love with all of them. I love paranormal romance. Nothing makes me smile like a new story I can get lost in.
So why all the continuous analyzing of The Twilight Saga? What makes The Twilight Saga so different?
I have no idea. 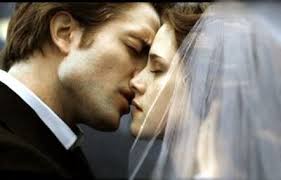 Stephanie Meyers basically wrote a YA story of star crossed lovers in a paranormal world. And in a paranormal world, there is always latitude given to the reality of a situation. There are just things that you have to believe. And depending on the writers ability will determine just how much you do believe. Twilight is not the first of this genre and they won't be the last. Personally, I think Twilight was a good thing to happen, despite the hype, it got kids reading again and that is always a good thing. Let me say that again because it is worth a repeat...kids are reading again. Now it could be argued that Twilight is ruining kids psyches and the reading of the series is not good, I don't think so. I found nothing in Twilight any different from stories I read as a 14 yr old. Twilight is Romeo and Juliet set in a paranormal world. And I do believe Romeo and Juliet is still required reading in high school.

The over analyzing of whether Edward is a good boyfriend, is Bella a role model, is Twilight a story of domestic abuse, and my favorite, Stephanie Meyers subtle nuances of Mormon beliefs through out the story, has reached epic proportion. Is Twilight endangering the future of our generation with unrealistic beliefs of a fairy tale life, of finding a Prince Charming, of believing he even exists? Believing in an all consuming love despite all odds? Hogwash. Believing in love is not bad. Believing in Prince Charming is not bad. Prince Charming is nothing more than the idealized man some dream of as a future spouse. We all believe in that, young and old alike. We all have our "lists" in what we want in a man. Is that a bad thing?
I don't think so. So when the lovely @Femme_Mal tweeted me the article Why Twilight Is Screwing Up The Next Generation  by Neha Gandhi with a comment that I might be interested, I was stunned at what I read. The Op-Ed writer took Twilight and the story to a level I have never seen. This was not an article on whether the writer liked Twilight or not, this was an article on "Bella Swan" and the damaging role model she is. That she is harmful in how she was portrayed, weak, a blank slate that we can all immerse ourselves in.
The Op-Ed writer supports her article with the statement -

"There are definitely many, many other bad (even worse) influences out there, but few of them are so far-reaching, and cloaked in such a guise of innocence, and maybe even virtue. We definitely allow for a character (and of course, every woman) to make her own choices, but we reserve the right to air our own concerns about what lessons our sisters and cousins and nieces and neighbors are taking away from said character. And this one gives us serious pause." - Neha Gandhi

Again, why Twilight? What was so different about this story that separates itself from the 1000's of other YA series? I can only assume the franchise it has turned in to. Other than that, I just don't see it. Be that as it may, we all have opinions of Twilight, most are the argument good story vs bad story, the Op-Ed piece though I think is damaging in itself that it was so biased and inflammatory. These type of opinions are more damaging than any fictional story published. The comments the article received are worth the read alone. You would be surprised some of the things people had to say. Good and bad. Some were even scary.
Another quote from the Op-Ed writer -

"Bella is essentially a romanticized version of all of our worst, weakest impulses, put up on a pedestal, and mixed in with a major dose of Mormon proselytizing, and that makes her dangerous."  - Neha Gandhi

We all have our opinions of Twilight, some more than others. I personally don't get why the continuous over analyzing of the story let alone the characters. Twilight was a fun story. It was romantic. I liked it. But I didn't like it enough to obsess about it nor write opinions pro or con. It was simply a good read. And that's how it should be thought of, a good read. Not the constant analyzing of the context.
There are so many stories that can be analyzed on this level, Twilight is definitely not one of them.
And thanks to the lovely @Femme-Mal for giving me something to ramble on about this month. My mind was a flutter with the holidays, until her tweet came along. I am still bothered by it, but that's why we vent.
@Femme-Mal wrote an amazing comment on the article herself, you can read it HERE.
One more thought, we were all 14 yr old girls at one time. We all had our obsessions and still do to an extent.
And Prince Charming, well, he does exist in our imaginations and dreams. That's why we love to read, so we can dream about him.