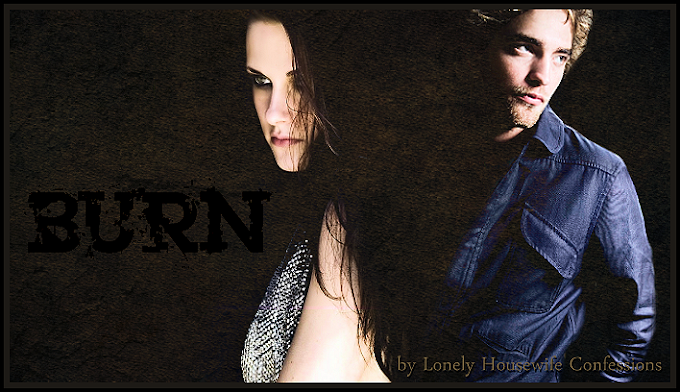 http://www.fanfiction.net/s/7592567/1/Burn
Ever have that guy friend that you wanted more from? The one that was there for you, held your hand and told you that he loved you. One day lines get crossed and there's no turning back. But what happens with that special guy friend can't make up his mind and someone else comes along? Which path do you follow?
Have you ever started a story where the central character annoys you? Where your just shaking your head wondering what in the world they are doing? Why they are making such bad judgement calls? Frustrating to the point where you want to flounce but don't because your curiosity gets the best of you?

Burn is that story for me and Lonely Housewife Confessions is weaving a tale that is making me crazy!

This is the story of Bella who loves the unavailable married Jasper, who by the way, is not a nice guy, and Edward, who is a nice guy and very available. Bella hangs on to the hope that Jasper will be with her one day even though he clearly gives her all the signs that it will never happen. Stringing her along selfishly. Bella continuously makes bad choices because the heart just wants what the heart wants. She meets Edward who is all kinds of perfect for her but frustrating us with her inability to decide who and what she wants.

Burn will frustrate and make you buggy at every turn to the point you just want to reach out and shake some sense in to her! The story is so well written that even though you are annoyed while reading, you stick with it. The writer gives you just enough hope that Bella will finally open her eyes that you just have to be there to see it.

Burn is Lonely Housewife Confessions first WIP posted having recently completed the Twilight 25. Normally I do not do double rec's on the same post but Rise Of The Phoenix developed out of a Twilight 25 prompt and is worth mentioning and definitely the read. http://www.fanfiction.net/s/7699676/1/Rise_of_The_Phoenix
Edward comes to the US to attend Uni. He quickly figures out that being a barman isn't going to pay. What he does to ease the burden may not shock you, but his mum will definitely be upset.
Rise Of The Phoenix is just about the funniest drabble I have ever followed. The story line, well, not one I have ever seen before. And as drabbles go, you get just enough from the writer to tie you over until the next day. Thank goodness for that because this story line is one that will have you laughing at every turn.
Edward is a poor college student struggling to make ends meet and takes you on a ride of what he is willing to do to make money. Definitely not something his mother will be happy with, but we will all love it!
Lonely Housewife Confessions has me laughing at every update all the while wanting to give Edward a hug. Definitely one of the funniest drabbles I have come across. And Edward is British in this story so you get all those lovely "British-isms" as well!
* Rise Of The Phoenix is a continuation of Chapter 3 Prompt 8 from the Twilight 25.
For more stories from Lonely Housewife Confessions, check out her FF profile and you can also follow her on Twitter @VivCoLH.
~~~~~~~~~~~~~~~~~~~~
Banners:
Burn by IllicitWriter   Rise of The Phoenix by Christag Banners
Share This