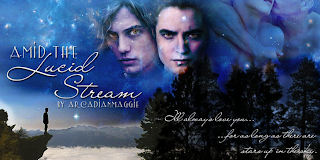 
This story took me completely off guard.

From the opening line...


Edward's not sure how long he's been sitting at the cliff's edge.
The writer launches you in to a beautifully expressive visual start to her story.

Amid the Lucid Stream is a story of regret, mistakes, guilt and love lost. And though Bella and Renesmee are there, this is not a story you would ever imagine nor of a love that could exist this powerfully.


He can feel her staring at him as he crosses the room. Guilt claws at him and he tamps it down; he can't think of that right now.
And though slash, it is so powerfully written you can not help but walk away feeling the sorry and pain of a deep loss.

This has to be one of the most beautiful heart wrenching stories I have ever read. I am actually glad it was only a one shot, I really don't think my heart could bare a multi chapter. Arcadian Maggie pours heart and soul in every word of this tale. You literally ache with every word of Edward's pain.


He opens his eyes and looks up at the stars. For a moment, he can still feel everything, as if it were real.
More stories by ArcadianMaggie - http://www.fanfiction.net/u/1867753/ArcadianMaggie