Are you really stealing that story? 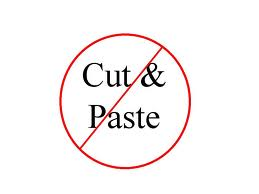 Nothing thrills me more than a good story. A story that I can involve myself with. Because that's what a good story does to me. I become part of it. I know the characters like my friends and family. They become real as does their world.

Whether it be a FF author or a published author. A good story is a good story.

When a story is plagiarized, I am truly stunned. Not only is it just wrong on so many levels, it just makes you think, why? Why are you stealing a story? If you want to write a story, then write a story. If you do not feel you have the ability, or your story is not good enough, then take some courses on story writing, there are 1000's of them that teach how to write your ideas and express your words.

Plagiarizing has always been part of the Fandom sad to say. It happens from time to time. It's become part of the "we don't like it, but it happens attitude".

Needless to say, people were outraged and the complaints flew. Both plagiarized stories were since removed and things have calmed. But it still makes me think, why? Was it because they are FF authors and their characters are borrowed making it acceptable to steal from them? Though the characters are borrowed, it is still their story line, their creation.

At no time is it acceptable to cut and paste a story, change it up a bit and post as your own. It is not your story but you willingly try to do so regardless. Why would you think this was OK? Because it is a FF story? Is that why? Well it's not OK. A lot of time and effort go in to writing stories. For the most part, these stories are the authors babies. They spend countless months writing and perfecting their creativity and craft. Sharing with the Fandom the enjoyment and pleasure of their talents. Waltzing in and stealing because you think it is OK just shows how misguided you are.

After all, would you steal a published story? Change it around and make it "yours"? Again, I know some have tried but that is the rarity. So let's not do it to our FF authors. They deserve the same respect and courtesy as published authors.

The stories that were purged:

Dark Games & Twisted Minds  by Katinki, completed May 2010 and Ultio by 22blue, completed May 2010. A year has past since completion, maybe why they were chosen for the attack? Again, not the smartest move. Even though a year has past, they are still very well known in the Fandom. These were stories that touched us, heart, mind and soul. Stories that have been reread countless times. Because a story completes doesn't mean we forget. Doesn't mean we "unfavorite" them. This is where the plagiarizers mistake lies, hence the word "lies", they must really think time makes us forget a truly good story.

One final thought - Plagiarizing hurts us all. Some authors become so upset, they pull the story. You can't blame them, but it upsets us all as we no longer get to enjoy them because of another's selfishness.