All This Time by Mel Henry #ReleaseDay #Giveaway @Mel_Henry

Amicable could easily define Carly Cooper, so it’s only fitting that it should describe her divorce from detective Trey Foster, too. Between two career-driven people, marriage can be hard enough, but combined with fertility issues and constant loss, it just became too much for them to bear.

While sorting out her feelings about her broken marriage and seemingly broken body, she decides to move in with her lifelong best friend, Alejandro Cruz. Alex has been with Carly through all her triumphs as well as her low points, including the break-up with her first love, Josh McCarthy, whom Alex is still friends with.

Carly just wants to get to a point where she can get closure from all her relationships so she can succeed at one – just one that she can keep forever. Determined to help her do that, Alex invites Josh to their house for a “besties” get together weekend. Good food, good wine, and good conversation.

Fortunately for the three of them, closure is exactly what they all get, and for the first time in their lives, they can move forward. After all, Josh has really exciting news that he wants to share with his best friends: South Station Boyz are reuniting. With a new album, new videos, and even a new tour on the horizon, they invite Carly and Alejandro to join them and the Trainwreckz, the tongue-in-cheek nickname for their fans, on this crazy journey.

While trying to prove her closure to herself and others, she becomes quite enthralled with handsome group member (and band mate of Josh), Dave Butler. He returns the interest and sparks fly. Then, one unplanned, reckless night (something that goes against Carly’s very own DNA) in Miami derails all her hard work, possibly throwing everything into the wind.  As she tries to sort it out, she also battles to not lose the people she loves. Can what she’s done while under one drunken indulgence ruin everything she’s worked so hard to fix after all this time? 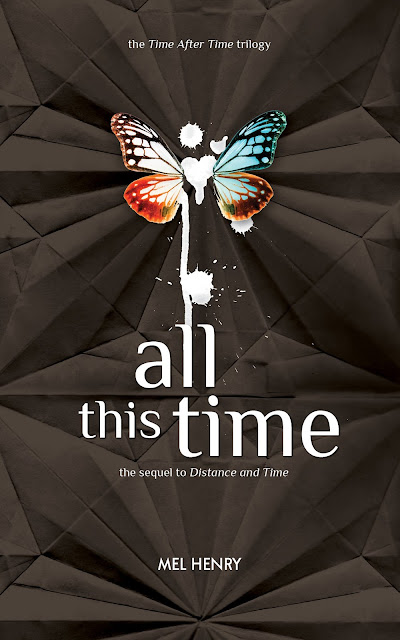 
I skimmed over the document in front of me and sighed. It read just as I wanted it to—my attorney had made sure of that. This didn’t make me feel any better, of course, but at least there hadn’t been an argument. My pen poised over the line above my name, I briefly considered what it meant once I signed.

My marriage to Trey Foster was over.

The last five years would be just another page in my history book. There were no children involved.

My defunct body had guaranteed it, despite several attempts. Trey and I were relatively diplomatic about our separation. We split everything equally and overall, we were walking away unscathed. We had come to the decision to get divorced as easily as we’d come to the decision to get married in the first place. We approached it with logic and reason, each of us having our own views on why we thought our marriage failed, another miscarriage—earlier this year—being the final straw for us both.

We’d mutually decided to end things before it got ugly. Hell, Trey and I hadn’t really fought the whole time we were married. It was only natural that we end it civilly, too.

I scrawled my name on the line and took a deep breath. The documents stated that I would return to my maiden name once it was filed, so I took pause as I looked at my name signed as “Carlene Foster” for the last time. My heart felt heavy and I took a deep, shaky breath as it all sank in. I slowly slid the paper across the table and looked up at my soon-to-be-ex-husband. I offered a half-smile/half-frown—one of those “I shouldn’t smile, but I don’t want you to think I hate you” kind of expressions. We’d both become good at those over the last year or so. He returned the gesture as he picked up the pen and signed his own name. He looked over at me sadly then handed the paper to his attorney, who picked it up and went into the hallway to make duplicates before the clerk took it to the courthouse to be signed by the judge. My lawyer followed him out of the room, leaving Trey and me alone. The second hand ticked on the clock above the door.

“We tried,” I said, breaking the silence.

“We did.” He nodded in agreement, his lips flattening in a slight scowl.

“I’m glad we can stay friends.”

More silence. I picked at a snag on my skirt and stared at a smudge on the, otherwise shiny, board room table.

I held up my hand and shook my head. “No regrets, Trey. Remember? No regrets, no woulda-coulda-shouldas, no apologies. We agreed.”

Trey and I had talked about our pending divorce for a couple of months and worked out all of the details ahead of time instead of paying our attorneys to create fights where none existed.

“I think it’s over, Trey,” I said softly as I picked at my dinner with my fork.

He looked up at me from over his wine glass, swallowing a mouthful of Riesling. He set the glass down and wiped his mouth. “It?”

He laid his napkin next to his plate and crossed his ankle over his knee, leaning back in his chair. He rested his chin on his fist and looked at me. Our eyes locked for what seemed like several minutes and he finally inhaled and nodded.

I nodded solemnly. “Do you think counseling would help?” I offered, though knowing in my heart it wouldn’t. Counseling wouldn’t bring back our lost babies. Or the tension brought to our bedroom with every miscarriage. You couldn’t relight a fire under cold embers. No amount of counseling could fix that.

He shrugged, “We could, but I don’t know that it would help.”

“We’ve definitely tried.” And we really had. We took a trip to Hawaii in February for our anniversary. After the last miscarriage, in April, Trey made arrangements with a co-worker to borrow his cabin on Lake Michigan for a weekend. We went to New York for a week in June for his mother’s sixtieth birthday. We tried to scale back our work days and we purposely took weekends off with the intentions of spending them together.

All of it was futile, though. When you’re married to a cop, there is no such thing as time off. His cell phone rang non-stop and his hours were always long. If it wasn’t a case occupying his time, it was training or recertifying.

And I wasn’t blameless in the matter, either. My phone was constantly pinging with new emails from work, too. Photographic editors weren’t always as busy as I was, but when your boss was the female version of Hugh Hefner, you didn’t get to ignore emails. Besides, I loved my job with Beguile. We were two workaholics and I didn’t see that changing for either one of us any time soon.

“Maybe if we gave it a little more ti—”

“Babygirl, we’ve been living like roommates for months,” he said. “How long do we really wanna pretend it’s gonna work? Let’s face it, there’s just nothing left anymore.”

I’d spent so much time worrying about how hard he’d fight me on this that I wasn’t really prepared for his acquiescence. Tears I’d spent months shedding in solitude, rushed to my eyes; my face grew hot. I hoped for at least some small argument—something that told me I was wrong—that he did still believe in us and we just needed to work on it some more. His immediate agreement indicated otherwise, and that stung worse than admitting out loud that we had problems.

Ever the peacemaker, he stood and took my hand, pulling me to my feet. He wrapped his arms around me and rubbed my back as I let the tears spill.

We decided that he would keep our loft on Superior. It was only six blocks from his work and since I worked by the lake, it would make more sense for me to find a new place closer to the office. We’d bought our condo in 2007, when we relocated to Chicago from New York, and we both worked so much that it was mostly just a place to sleep and change clothes between meetings and travel. Trey insisted I stay as long as I needed to, in order to find a decent place. He felt there was no reason to stop being nice just because our marriage failed. I agreed but moved into the guest bedroom that night.

Our attorneys returned and handed us a copy of our divorce papers explaining they’d send us each a notarized copy of the finalized decree sometime in the coming week after the judge signed it.

We shook our lawyers’ hands and turned, walking out of the meeting room together.

Mel Henry has been an avid reader since stealing her first Harlequin from her mom’s nightstand in second grade. Because some words were too big for her seven-year-old vocabulary, she took to writing her own stories (much to the relief of her teacher) and has been doing so ever since.

After having held various jobs in her life that brought her no satisfaction and only a piddly income, she decided to publish her first book. She figured being a starving artist instead of just starving sounded much more interesting. Being able to do it in her pajamas and no make-up are just perks to the job.

Living in Iowa with her husband and a couple of teenaged kids, Mel’s an avid cook (sometimes by choice), traveler (always by choice), and a hardcore warrior against chronic Lyme disease (definitely not by choice). She loves concerts, thunderstorms, and good coffee. She loathes conspiracy theories, egotistical people, and sushi.

She is currently collaborating with three other authors on a project, and has the foundation in place for her next series. In the meantime, you can find her current works on Amazon and other online booksellers. 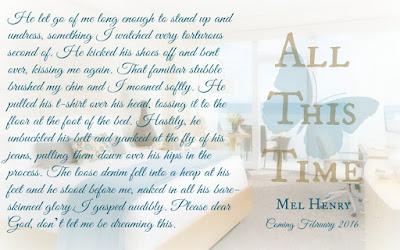 All This Time (#3) (Everywhere for a LIMITED TIME, then Amazon only)
Distance and Time (#1)  (EXCLUSIVE to Amazon) 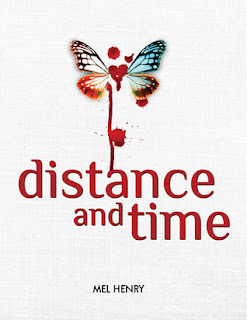 Better in Time (#2) (EXCLUSIVE to Amazon) 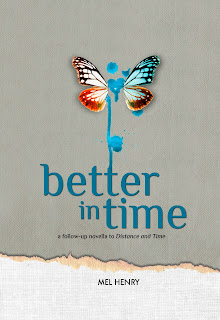 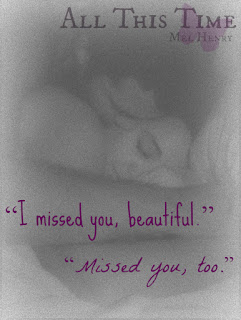 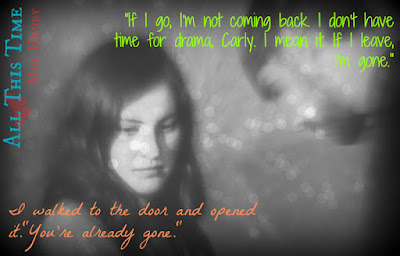