When Jillian Butler moved back to Lilac Ridge to run the second chance animal rescue her aunt left her, she knew it was only a matter of time until the town learned of her fourteen year old secret. What Jill didn’t expect was to run into the man with whom she created that secret. With billionaire Austin Hale insisting she let him adopt a dog, Jill has no choice but to face the man who shattered her heart and betrayed her trust. It’s only after a single's auction to raise money for the rescue that Jill finds her stubborn heart being rescued from the one man she thought she could never forgive.

This is the first story in Susan's Superstitious Brides romantic series.

A billionaire stumbles upon underground MMA fighting in L.A. and finds himself in a female MMA fighter's corner.

To keep her stock car racing team competitive, Alexis Robles needs a co-owner. She’s hoping for a silent partner, but instead, billionaire investor/racing fanatic Noah Spencer demands a ride of his own. She wouldn’t mind adding another team, but not if it becomes the laughing stock of the series.

Noah raced stock cars in minor and regional leagues while he was in college, but gave it up when he became too busy making money. All that money is nice to have, but it means nothing if he can’t pursue his passion. Buying into an established team is his best bet for quick success, and Jack Robles Motorsports was a good company until their main sponsor left. The hardest part of this transaction will be convincing Alexis he’s what she needs in her future.

Gillian traveled to the Dalmation Coast to close the door on tragedy. But an adventurer with a private yacht may be just the type of enticement she can't resist...for better or for worse.

Honeymoon with a Billionaire by MJ Summers

When good girl librarian, Natasha Jones finds herself alone on her honeymoon, the last thing she expects is to end up in the arms of billionaire Kirk Tyrrell. Instead of spending the week licking her wounds from her fiance's last fling right before the wedding ceremony, she allows Kirk to whisk her away to his mountain estate in Aspen, Colorado. The flames of their attraction run hot as Kirk uncovers the wildly passionate woman hidden inside Natasha, but is it just a rebound or the start of their forever?

Ten dollars and a smile. That’s all it took to change the course of Samantha Foster’s life. After winning the Billion Dollar Smile contest she set off to live a week in the shoes of illusive, gaming billionaire, Miles Covington, but could she get past his secrets and games to win a place in his heart? 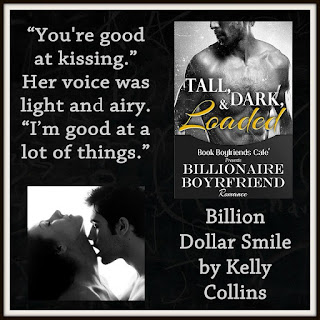 
National Bestselling author of racy, rule-breaking romance and women's fiction, Susan Ann Wall is a US Army veteran, a Bon Jovi fanatic, and leans to the fun side of crazy.


USA Today Bestselling author Ari Thatcher is the naughty side of sweet romance author Aileen Fish. Ari has always loved sexy romance where love takes the leading role. Reviewers have called her work “captivating” and “compelling”, and her characters “intelligent, intriguing and realistic.”


Carly Carson is a contemporary romance author who likes to add a twist of magic to her stories.


MJ Summers currently resides in Edmonton, Alberta with her husband, three young children and their goofy dog. When she's not writing romance novels, she loves reading (obviously), snuggling up on the couch with her family for movie night (which would not be complete without lots of popcorn and milkshakes), hiking, Zumba and yoga (to make up for the milkshakes), swimming and camping (with lots of gooey s'mores and hard ciders). She also loves shutting down restaurants once a month with her girlfriends. Well, not literally shutting them down, like calling the health inspector or something. More like just staying until they turn the lights off.

MJ is a member of the Romance Writers of America, as well as the International Women's Writing Guild.


Kelly Collins writes with the intention of keeping the love alive.

Always a romantic, she is inspired by real time events mixed with a dose of fiction. She encourages her readers to reach the happily ever after and bask in the afterglow of the perfectly imperfect love. Kelly lives in Colorado with her husband of twenty-five years. She loves hockey, shiny objects and has a passion for lemon drop martinis.