In Alta California, the three daughters of Don Francisco de la Rosa are well known for their beauty and charm. Nereida, the youngest daughter, is sweet natured and kind while Narcisa, the middle daughter, is sensual and flirtatious. However, it is the eldest daughter, Natalia, whose beauty and spirit captivates their neighbor, Cruz Villareal.

A Californian with Spanish blood, Cruz is captivated by Natalia the moment he sees her riding at breakneck speed across the lush green grass of Santa Barbara. He vows that the Sonora beauty will belong to him and no other.

Natalia is at first put off by the arrogant Cruz, but as time passes, she succumbs to the growing attraction between them. In his arms, she experiences passion and love and wants to be his bride, standing beside him as he makes the Villareal vineyards a success.

But mistakes from both of their pasts come back to haunt them, threatening their newfound happiness.

Nereida and Narcisa struggle with their own relationships and responsibilities while Cruz and Natalia desperately fight to be together. But in a small town filled with secrets and lies, can true love conquer all? 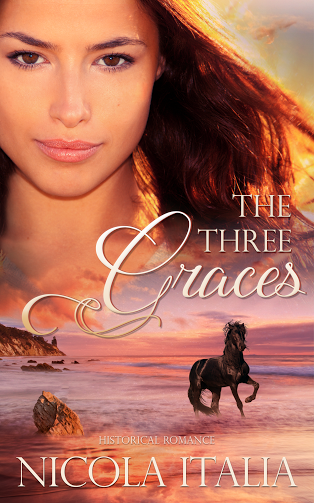 
Cruz met his father on his way back to the house. “I am required elsewhere, but please see to our guest in the stables. Her name is Natalia.”

He moved toward the stables and thought it unusual that a woman would wish to see the stables at a fiesta. Most women he knew would be concerned about their dress and hair, not horseflesh.

He stepped inside the large stables and felt the cooler temperature. The horses were each inside their stalls, and he saw a figure at the far end of the large structure. She was dressed in a dark blue gown. He took long strides toward the woman. He would see her safely back, as his father wished.

“Senorita,” he said swiftly, and when she turned, he felt his heart begin to race.

Natalia noticed his crisp clothes, from the cut of his trousers made of wool to the jacket he wore that emphasized his shoulders and hips. Everything about him spoke of quality and breeding, and suddenly she knew without a doubt who he was.

“And you must be Natalia de la Rosa,” he said softly.

Natalia almost flinched as he spoke her name so softly and with such sensuality. He enunciated every syllable of her name drawing it out as Nah-ta-lee-ah.

“My father asked that I see to our guest, and he said her name was Natalia.”

“When I returned from Spain, I was told we had new neighbors, and that Don Paco had three daughters of uncommon loveliness. The eldest one in particular was said to be quite beautiful.”

Natalia blushed under his dark scrutiny.

“You shouldn’t listen to gossip,” she said.

“Let me escort you back, Natalia.” He threaded his arm through hers.

Natalia turned to him. “You may call me senorita, which is proper since I don’t give you leave to use my Christian name.”

“Now why is that? I quite like the taste of it on my tongue.”

Natalia flushed. “Your behavior is inappropriate.”

“I don’t recall any objection the other night when we were at the ocean’s edge.”

Natalia looked around to make certain that they were alone. “Nothing happened the other night except that you touched me when I did not give you leave to! And I said nothing because I thought you an ill-bred ruffian.”

He gazed down at her oval face and into her warm brown eyes. She was a lovely woman, and it amazed him that she was not already married with several children.

What man wouldn’t want to bed her quickly and make her his?

“Ruffian? I thought I was a bandit, though in truth I am a Californio with Spanish blood,” he stated matter-of-factly.

“And I’m a Mexican woman of Sonora,” she said proudly.

“Our children would be another generation of Californios, were we to marry,” he said, caressing her arm.

Natalia was shocked at his words. “Marry? I’m sorry, Senor Villareal, but I can say with utmost certainty that I will never marry you. You’re very arrogant, and you presume too much.”

Cruz made a tsk-tsk sound. “That is most unfortunate. Because I suddenly find that after all this time, I am ready to marry.”

“Then I wish you much luck in your pursuit of a bride.” She tried to move away from him only to find him holding her arm in his firm, warm grasp.

“If I did wish to marry you, Natalia, nothing on earth would stop me from having what I want,” he said before he pulled her into his arms.

Since that first meeting at the ocean’s edge, he had been enchanted by her beauty and spirit. She was like one of his father’s magnificent Arabians. He wanted to possess her but also hold her and keep her safe. It was a feeling that overwhelmed him and shocked him. He had never felt that way about a woman.

Natalia’s heart raced, and she realized that she was kissing a virtual stranger. She felt desire for him, and it was a new and somewhat disconcerting feeling. When she pushed away from him, she wiped her mouth with the back of her hand without thinking.

“That’s offensive,” he told her, fighting back a grin.

“You’re offensive!” A blush spread across her cheeks, and she looked delectable.

“Is there another lover I should be made aware of? Do I have to call a duel for your hand?” He made an attempt to peer about the stables as if looking for someone.

“My father loves me! I have final say on any marriage proposal, and you may rest assured that I will say no if you approach my father!” she said, her breasts heaving.

He would have sold his soul in that moment to drag her into a stall, toss up her skirts, and taste the sweet honey between her legs.

“I’m sure he does love you, Natalia. You are a beautiful woman. Perhaps he wants to keep you by his side for that reason. But even he knows that you cannot stay unmarried forever. I can offer you much.” He smiled at her.

“I dare you to ask him!” She was shaking, and she wanted to smack the arrogant grin off of his face.

“Stop the hysterics, Natalia. Come, let me escort you back. It was just a kiss,” he soothed.

“No, thank you,” she said, moving away from him.

She began to walk down the long aisle, passing the many stalls. When she glanced behind her, she saw he hadn’t followed. Instead, she saw him standing near his horse, touching its long neck and licking his lips as if savoring her taste. She despised him then.

When she rejoined the party, she saw Ignacio standing next to Neddy with a wide smile on his face.

Neddy was smiling shyly up at him, and she knew that they would be married soon. She was happy for her sister and would congratulate her once the announcement had been made.

“Let’s dance.” Ignacio took Neddy’s hand, and they joined the other couples.

“My little girl is to marry,” Chelo said softly to Natalia as she stepped beside her.

“You don’t want her to marry?” Natalia asked.

“Oh, I do! I want her to be happy, but it’s hard. She was only a baby when your dear mother died, so she is like my own,” Chelo sighed.

“Of course. I understand.” Natalia nodded and touched Chelo’s hand. “But she will be happy. He’s a good man, a kind man.”

Kelly O’Keefe joined them wearing a bright green dress, which she said she had brought with her from Ireland. Natalia sipped her lemonade and looked across the courtyard past the dancing couples.

She could feel the pull of Cruz’s dark eyes, and the desire in them was clearly evident. He was a demon, and she turned away from him to concentrate on her friend.

Alberto watched as his friend stared at the eldest de la Rosa sister across the courtyard.

“Oh no, Cruz, not that one,” he said, shaking his head and handing his friend a glass of agua fresca.

Cruz took the offered glass but barely glanced at his friend. He was still remembering the taste of her lips in the stables and her sweet curves pressed against him. “Why not?”

Alberto sipped his own drink. “When they first arrived here, all the men wanted her.

She’s beautiful, no? And there are no sons, so the property will be distributed accordingly, and rumor has it that she is Don Paco’s favorite.”

“Well, that first year there must have been at least three offers for her hand, and they were all denied,” Alberto remembered.

“What was the reason?” Cruz asked.

“Well, that was the strangest part. Don Paco told each man that he would place their offer before Natalia, but it was her choice. Each time she said no.”

Cruz grimaced. So she was right. Her father did allow her final say on any marriage proposal.

“But it’s more than that. The youngest sister let it slip to Father Ybarra, who told the whole town that there was a man once.”

Of course there was a man, Cruz thought. He remembered those lush lips underneath his and her body pressed against him. She was soft and feminine and everything a woman should be. Of course there had been a man who had claimed her as his and taught her all the things a man could teach a woman.

“What happened to this man?” Cruz asked nonchalantly.

“They were engaged before they left Sonora. Apparently, the father wanted his daughters to come to Alta California first. After several months here, they received word the man had died in Sonora. All the women in town think she still grieves for her lost love, and the men want to replace him.”

“So as I said. Not that one.” Alberto smiled.

Nicola spent her childhood in Los Angeles. As a young student in elementary school, she had a great fondness for reading and began to write creatively. Her fifth grade teacher encouraged her to keep her creative stories and to continue to write which she did. She graduated from university with a degree in communications and held a variety of positions in journalism, education, government and non profit.

While her writing during this period was business related as she wrote for a newspaper, marketing newsletters and press releases she remained dedicated to romance fiction.

Her first novel “The Sheik and the Slave” began as chapters on a romance website and was voted top romance story. “The Sheik” fans are amazing and Nicola remains deeply indebted to them. They have encouraged her to continue writing and have been extremely supportive.

Nicola has traveled extensively throughout Europe, China and Central America. She speaks basic Spanish and has a love of all languages.

Nicola’s goal is to create rich characters with a strong male lead and a passionate female lead. She also strives to set her books in places not normally written about such as Arabia in “The Sheik and the Slave” and Ceylon in “The Tea Plantation.”

“We all want a happy ending but I like to create some friction and chase before my leads come together,” Nicola has said.

Her novels are available on Amazon.

“The Three Graces” is her sixth novel.