How much would you risk to protect the people you care about the most?

Self-made billionaire Robert Cutter made his money investing in struggling companies. When one of his most valued and trusted employees begins to act erratically it pulls Robert into a swirl of dangerous situations. Things escalate quickly and not only puts his life in danger, but that of his family and close friends.

Robert now has the life and family he never imagined for himself. He has to choose between protecting his immediate family, and those he considers "family". As the past and secrets are revealed,

Robert finds himself questioning things at his very core - his decision-making.

And protecting his family may just mean losing the family he never knew he had. 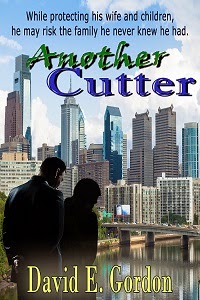 The Mayor was seated at one of the couches and stood as Robert approached. The admin offered a drink, which Robert declined. The men shook hands and Robert noticed that the aid left the office with the admin. There were several folders spread across the table in front of them, along with a tall glass of orange juice. He had heard that the Mayor was cutting back on his caffeine.

“Robert… may I call you Robert?"

"Yes sir, Robert is just fine. How can I help you today?"

"First, I wanted to thank you for stopping by on such short notice. I heard you were in the building and I had a meeting cancel on me. So this seemed like an opportunity I couldn't pass up on. I understand that your soccer tournament was incredibly successful. My nephew was on one of the teams and his family came for dinner on Sunday. I hope we will see many more of these types of tournaments, they are vital to the kids in our communities and highlight so well the good things being done."

"Thank you, Sir. That is very kind of you, and I am glad to hear your nephew enjoyed it. My son had a wonderful time as well. But, I don't think that was why you really called me in here?"

"Very perceptive as always, Robert. No, it's not. There is a couple of things that I wanted to discuss. The first is that the city will be awarding you with a Man of the City award. This usually goes through a media person, but I wanted to tell you myself. This is not a politically motivated award at all. Please believe that. What you did for that neighborhood, the park, and the kids all over the city is nothing short of amazing. I am personally proud to know you. Thank you."

As the Mayor continued to speak he reached over and shook hands with him again. "My media group will be reaching out to your folks. I will defer to you as to how we do this, but I was hoping you would accept it at a fundraiser I am having in a couple of months. The fundraiser is actually for the Policeman's Widows and Orphan's Fund. Given your history I thought that would be appropriate."

"Thank you, Mr. Mayor. That is incredibly kind of you to say. I will do my best to be available. Have your team call my office and I will make sure that Jennifer knows to make me available."

Before The Mayor spoke he handed Robert a file. "This is for your eyes only Robert. There is an opportunity for an investment that I think you might enjoy. Because of the investment itself the city has to be involved. While not owners, partners, or investors, the city has a vested interest so we sit on the board. As I said, this is highly confidential and has not been publicized by anyone. Those involved are doing their best to keep it as quiet as possible. As you will see when you take a look, as soon as the process is officially started it becomes public knowledge.

I will warn you of one thing should you decide to move forward. Because of the investment it requires intense scrutiny by several very public organizations, including the federal government. I am only telling you this because of what Moffit is up to. Between me and you, he is on a witch hunt for no apparent reason except that I know he is up for reelection next year, and he may have a serious competitor."

"Thank you, Mr. Mayor for this opportunity. I will take a look at it carefully. I hope you did not put yourself into any unfavorable positions by giving me this. You have been an asset to this city."

The Mayor chuckled at this. "Thanks, Robert, I don't usually get business approving of my politics. And no, as an interested 'silent' partner the city is permitted to recommend people for the investment."

Both men stood and shook hands briefly. "Robert, I will keep an eye on the DA but I can't do anything more than that. Unless of course he steps out of line."


"Thank you, Mr. Mayor. I look forward to hearing from your media team and it will be an honor to accept the award from you."

I live in Southern New Jersey with my amazing wife, who is also my best friend. We live just outside of Philadelphia and about an hour from an awesome selection of beaches. It was on a beach that I wrote my first short story and I love to spend as much time as possible there. There is something so invigorating about the sun and the blue skies.

When not working on writing books or my blog I am a husband to an amazing woman, and a father to two fantastic young adults. I am also a corporate finance professional that spends the rest of my time helping executives and business leaders improve and grow their business. It is some of this experience, which has helped bring this story and the sequel to life.

Other Books in the Series

Power, fortune, and prestige… Greed, threats, and dangerous liaisons… Nothing is worth your life, but is your life worth living? Self made billionaire Robert Cutter made his money investing in struggling companies. Plagued by “accidents", it becomes apparent that someone is trying to kill him. Injured by a concussion in one of the accidents, the agonizing realization is that his not-so-perfect past is coming into clear focus.  Cutter has everything a man could ask for - money, women, cars, houses, and power. But, with the latest attempts on his life, he starts to rethink his life and evoke change. Soon he begins to realize that was important is no longer that significant. He thought he had everything, but he had nothing.
Amazon.com | Amazon.co.uk | Nook