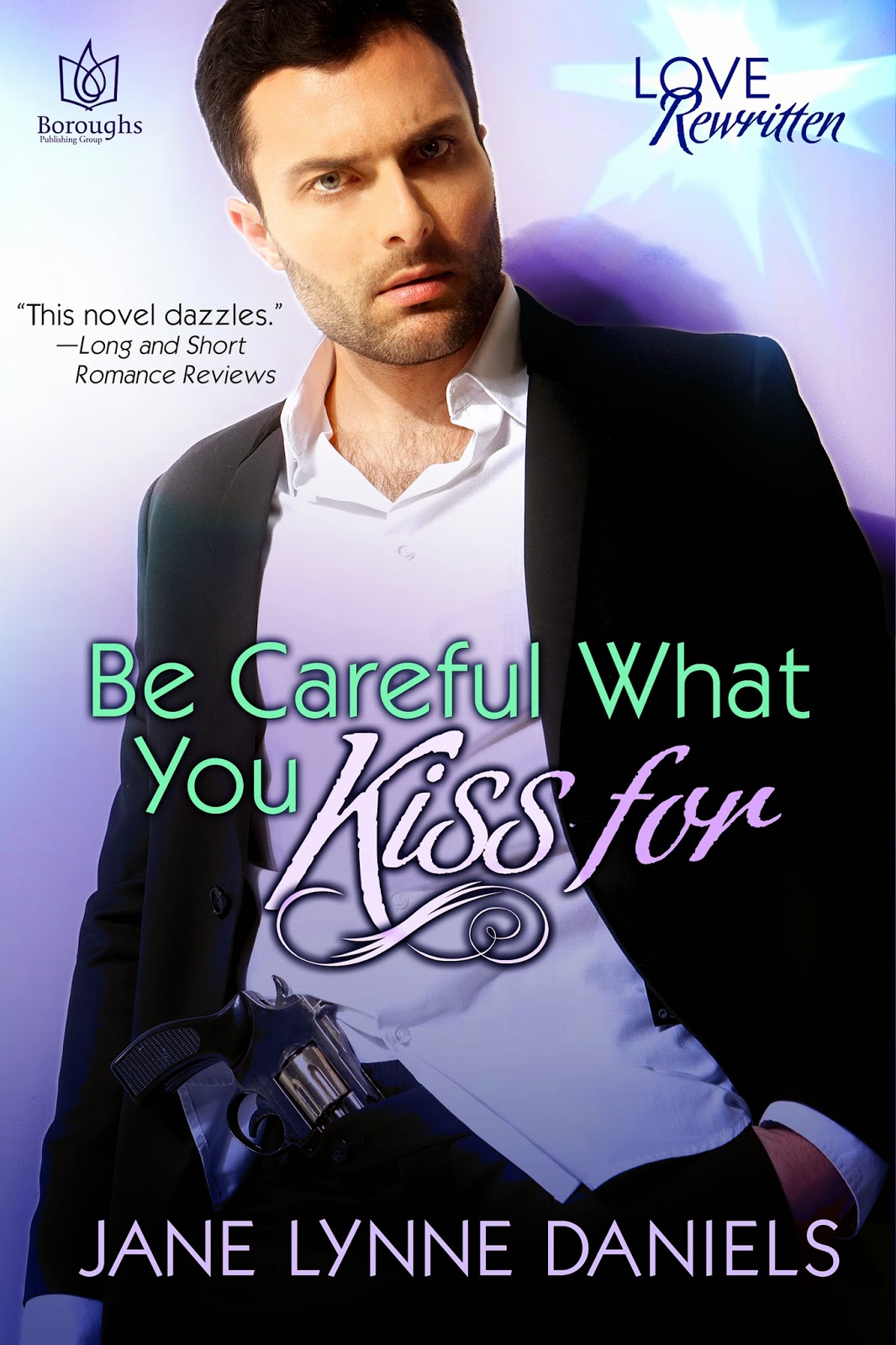 Be Careful What You Kiss For (Love Rewritten, Book 1)

When a psychic gives Tensley the chance to erase her biggest regret and replay her life with the one who got away, who would have thought a simple “do-over” could go so terribly wrong—and feel so right?

When Tensley Tanner-Starbrook gets the chance for one life “do-over” from a well-intentioned but bumbling psychic, she goes for it. But that change turns everything else upside down. Instead of a buttoned-up corporate executive, she’s now an entirely unbuttoned exotic dancer. And she’s face to…face with the one man she’s never been able to get over.

Detective Max Hunter has come a long way from high-school bad boy, and with everything on the line, nothing can stop him…except seeing his first love dancing in the club he’s been assigned to investigate. Torn between getting her far away from the place and needing her help as an insider, he knows only two things for sure: Tensley’s stirring feelings he thought long ago buried, and a relationship with her would be career suicide. Yet, maybe, just maybe, this was a love meant to overcome the past.

EXCERPT:
From the 2015 RITA nominated Be Careful What You Kiss For:

One by one, her arms snaked along the stage, her ass in the air and hair falling around her shoulders as her nipples brushed the floor, sending waves of an I-can’t-believe-I’m-doing-this thrill through her. The man in the striped shirt gripped his drink and leaned forward. Tensley made straight for him, the tip of her tongue working a lazy, seductive journey around her mouth.

His face lit up in anticipation, which turned to raw desire as she reached the end of the stage and rose on her knees to stroke herself while watching him through her lashes. Then she beckoned him toward her with one crimson-tipped index finger. He stood as if in a trance, not seeming to notice as he tripped over a chair. He just kept going.

Come to Mama. This was so not Tensley Tanner-Starbrook. But who had to know that? No one.

For a few minutes of her life, she could be someone else. Have a little fun. Ride on up to the orgasm bar and mix her own, instead of hoping someone like Bryan, who got points for congeniality, but couldn’t rock her world if his cock was twice its size…would do it for her.

Head back, she thrust both arms in the air and her crotch toward the mesmerized man. Hell, yes. Shewas Delightful, thank you very much.

The voice of another man sliced through it all to jolt her brain, if not the body performing independent of her brain, to a screeching halt. “Back up, buddy,” he said, loud enough to be heard over the music. “No touching her.”

With a gulp, her arms still triumphantly in the air, she shifted an uncertain gaze to the chair, cloaked in shadows, where that voice had come from.

Razor-sharp memories pushed forward in her mind. The warm white bath of moonlight. A summer breeze washing over their damp, naked teenage bodies. The smell of newly mown fields. The lump in her throat before she worked up the courage to whisper, “I love you.”

Nooooo. She had to stop dancing. Had to end the dizzying swirl of confusion that had caused her to think—

Shadow man got to his feet and her eyes shot straight to his tall, dark silhouette. His fingers flashed into the light as he lifted a drink to her. “Lookin’ good.”

With every bit of physical strength she could find, Tensley grabbed the finger still motioning the man in the striped shirt forward. She pulled both hands down and to her sides. Her tongue tried to poke forward to lick her lips again, so she sank her teeth into it, hard, and let out a screech. She tasted blood.

Her body wasn’t giving up that easily, though. Before she knew it, she was back on her feet, gyrating and grinding, moving as though her two hands weren’t engaged in a go–stop–go battle. Every time her hip shot to one side, she stomped her foot, in the vain hope that would stop it. Something halfway between a purr and a growl came out of her mouth as she concentrated on jamming both hands on her waist. And keeping them there.

The striped-shirt man backed up, his expression baffled. Possibly because he’d never seen a step-dance striptease before.

Her hips continued on and then her leg joined in, kicking high as the music hit a crescendo, undeterred by the fight she was having with herself. It wasn’t until she ended up doing a vertical split of sorts, legs on the pole, fists still glued to her waist, that the music finally stopped and she regained control of her body.

Tensley eased her extended leg down and off the pole, inch by inch, and stood in the middle of the stage. After a minute or two of stunned silence, the crowd responded with polite applause and a few cat calls.

If he’s here, really here, I don’t want to know. I don’t. The man in the striped shirt approached to drop a twenty on the stage. Tensley peered past him into the darkness, trying to get a better look at the man she didn’t want to see.

The audience seemed to be waiting for her to do something. Tensley put one foot behind the other and bobbed a curtsy straight out of Miss Jodi’s tap dance class. Miss Jodi had always said a lady should never leave a performance without a curtsy.

She wondered, though, if Miss Jodi had meant every kind of performance.

Footsteps again clattered across the stage and the woman who had threatened to evict her earlier grabbed the mike to demand, “Now, are y’all ready for Terrible Tawny, the Tahitian Temptress?”

The audience sounded its approval and the woman spread her arms wide, the sleeves of her sparkling costume nearly knocking Tensley off the stage. She stumbled backward, but caught herself. New music blared and Terrible Tawny began to move her hips from side to side in time to the beat. Then she backed up, one long-limbed step at a time, until she reached the spot where Tensley stood.

Another sharp gyration and Tawny pulled off part of her costume with a flourish. When it landed on Tensley’s head, the crowd responded with hoots. Tensley reached up, yanked it to the floor and then tucked her hands under her arms, pulling them in tight as she shuffled backward out of the spotlight.Get me out of this place.

She hesitated at the top of the stairs, struggling to get her bearings. She had to call the police. Report this. And say—what? All she could remember was the flash above Madame Claire’s head. And the words she’d said. A do-over. The psychic had said it was possible.

What if the idea for revenge that Tensley had tossed off had actually happened? If she’d punched Rhonda Reardon. What if—this strip joint was now her life?

A wave of nausea turned her knees to Jell-O. She grabbed the metal handrail for support as she half-teetered, half-fell down the few stairs, then sat at the bottom and closed her eyes.

It couldn’t be true. She wouldn’t let it be true. She’d click her heels together three times, like Dorothy, and…

Then she heard his voice, inches away, rocketing straight through the music. “Been a long time.”

Her stomach did a double backflip. She remained perfectly still.

Warm breath ruffled the hair over her ear, caressing her skin. “I want a private dance.”

Tensley opened her eyes and turned to the one man she’d never been able to get out of her system, even though he’d shattered her heart so badly, it had never properly healed. Virtual gymnasts began spinning, twirling, leaping, falling off a balance beam in her stomach, until she had to press a fist tight to her middle to make them stop. 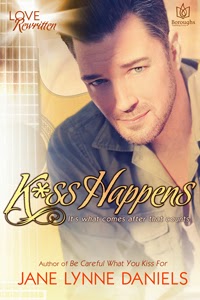 Emma Zane has one magical chance to erase the past and reclaim her soulmate lover and her dreams of a successful songwriting career, but as the song says, it ain’t gonna be easy.

What if you could have one “do-over” in life? Emma Zane, who lost her lover and soulmate, Chase Chapman, and her passion for songwriting when she couldn’t find the courage to go to Nashville, is about to find out.

But a do-over, even a magic one, isn’t that easy. Emma’s abruptly thrust into a new life as an award-winning songwriter, only to find out she’s double-crossed Chase, stomped on others with her custom-made boots, and is engaged to a rising country star who has Emma locked into an ironclad contract. Now the woman who once pushed aside her dreams and the man she loves have to navigate a new world to reclaim both—without racking up more regrets than the one she started with. As the song says, it ain’t gonna be easy. 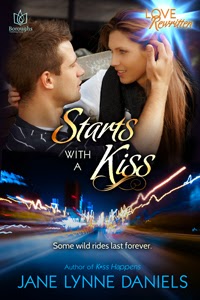 With the help of a seemingly innocent spell, Anya Ramsay is about to completely change the direction of her life—and it’ll be a wilder ride than she ever expected.

Everything will finally be better. In college Anya Ramsay made the worst mistake of her life, but a gypsy spell now offers the chance to have done everything different. To have done everything right. The college car accident that disfigured her face and paralyzed basketball star Ryder Brandt, the man she’s always loved? It’ll have never happened. But nothing is ever so easy, just as some things—like Ryder’s kiss—can never be forgotten. To rectify all, Anya has to come to terms with who she is and what she’s done. Rewriting this mistake will be a ride wilder than the original, but at the end of the trip is a happy ending—and a life with the perfect man for her past, present and future.

PURCHASE LINKS
STARTS WITH A KISS

Jane Lynne Daniels grew up a city girl, only to meet the love of her life at the annual Volunteer Fireman’s Ball in tiny Grass Valley, Oregon. She and her husband and dogs recently moved from the Pacific Northwest to Ohio, where they miss the rain and ocean, but love the change in seasons. Jane is doing her best to adopt a Midwest accent, but since people look at her funny when she tries, it probably isn’t working.