Book Blast | Who Saw the Deep by Christine Klocek-Lim @chrissiemkl 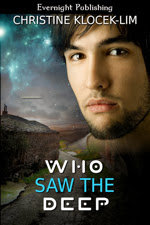 Who Saw the Deep by Christine Klocek-Lim
148 pages; Published November 8, 2013 by Evernight Publishing


When Noah moves back home after grad school, he doesn’t expect a simple handyman job to turn deadly. Amelia seems like a sweet old lady with a run-down house, but appearances can be deceptive. When an alien ship lands in her woods, Noah discovers that everything he believed about Earth and human civilization is wrong.

Amelia already gave her heart to one man—does she really want to let another one inside? Even though Noah is everything she ever wanted, can she really trust him? He seems like a good person, but her family’s genetic legacy is more important than romance.

When all their secrets are laid bare, Noah and Amelia discover that the survival of their species may be more dependent on love than either could have imagined. Civilization endures because of anonymous acts executed by ordinary individuals. And love, especially in the face of betrayal, is worth everything.

Buy Link: Amazon
“Noah, hold up.”
He ignored her. She dug her heels into the ground and hung on. He stopped, reluctantly turning. She looked at his face, so dear. The rain had matted down his hair, the brown strands sticking to his cheeks. She reached up, picking apart some of them, letting her fingers linger over his eyelids. She’d liked him almost from the first moment he’d come to her house, hands shoved into his jeans, face tired. She let her fingers fall down to his lips and his expression softened.
“We don’t have time for this,” he said gently. She shook her head, drew him closer. He came willingly and she dug her nose into his chest as they clung to each other. When she lifted her face, he kissed her roughly, as if afraid she wasn’t real. She hung onto him, kissing back untilthe chill from the rain disappeared and all she could think about was the heat between them. He groaned, kissing down her jaw, hands shaking.
“I’m not dead,” she said.
He hugged her tighter, trembling. “Your skin was all black. God.”
She wrinkled her nose. “Um, ewww.”
He choked out a laugh. “Yeah, it was certainly gross. I waited for you to disintegrate, but you never did. I grabbed you and the house collapsed around us as I ran. I didn’t know what to do.” He pulled back. Amelia couldn’t tell if he was crying—the rain soaked them both.
“I’m sorry. I didn’t know how to tell you about me.” She sighed. “I didn’t know if I should tell you.”
“Leah doesn’t believe you, does she?” he asked, voice soft.
A pang of terror raced through her as she thought about facing her daughter again.
“No. I tried to explain it to her but she thinks I’m crazy. It’s not like I could demonstrate.” She turned away, began walking down the trail again. “I mean, how do you explain this to your daughter?” She waved at herself.
Noah slung his arm around her shoulders. “What happens if you kill yourself?”
From the light tone of his voice, Amelia knew he had no idea. “I would die for real,” she said, flatly.
He stopped, face drawn. “Okay, I could see how that would be bad.”
She snorted. “Why do you think there aren’t more of us running around? The women in my family are immortal. We live and die and then come back to life. Like pushing a reset button. One of us could conceivably do this forever.”
Noah shuddered, clearly thinking of the larger picture.
“Exactly. And yes, before you ask, some of us tried. My mother told me stories about a few of our ancestors who went insane after centuries of rebirth. She mentioned one who forced a slave to kill her every year so she never aged.” Amelia’s step faltered.
“So how come there aren’t more of you?” Noah asked.
“We have two weaknesses: we can kill ourselves and we can kill each other.”
“But that means—” he broke off, his voice cracking.
“Yeah. We eat our own.” 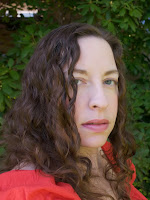 Christine Klocek-Lim   spends most of her time daydreaming—which isn't much different from what she did as a girl in northeast Pennsylvania, as a college student in Pittsburgh, as a twenty-something technical writer in New York City, and as a young mother in suburban New Jersey. For the past decade or so she's been dream-surfing in the Lehigh Valley of Pennsylvania.

She’s published one young adult novel, Disintegrate, and is pleased to be publishing her first sci-fi romance, Who Saw the Deep, an Amazon Breakthrough Novel Award semi-finalist.

She received the 2009 Ellen La Forge Memorial Prize in poetry. She has four chapbooks: Ballroom - a love story, Cloud Studies - a sonnet sequence, How to photograph the heart, and The book of small treasures.