Blog Tour & Giveaway | BECAUSE THIS IS FOREVER by Lena Hart

"Because this is Forever"

The book is classified by the publisher as 3 flames: Sensual, mild sexual scenes 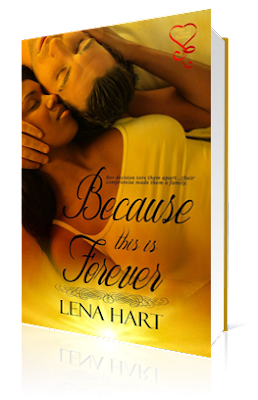 The decision that tore them apart...
Former hopeless romantic, Mia Trent, is crushed when the love of her life, Nate McArthur, reveals that he doesn’t want to get married—or have children. But it’s too late. Mia is already pregnant and her dream of “happily ever after” is sharply put to an end when she decides to keep her pregnancy a secret, refusing to force him into a life he doesn’t want.

The compromise that made them a family...
Five years later, Mia must reach out to Nate for help or risk losing her home and shelter for their son. Stunned and outraged by the sudden news of his child, Nate proposes a compromise: give him the summer to get to know his son and he’ll save her home. Yet with Mia back in his life, Nate isn't willing to lose her—or their son—again. What starts off as a temporary arrangement soon becomes a chance at rediscovery and becoming a family. Only Nate must convince his jaded dreamer that his love for her is true…and will last now and forever.

As she rinsed the last dish, Mia jumped when strong arms suddenly wrapped around her middle.
“Sorry,” Nate whispered into her ear. “I didn’t mean to scare you. I thought you heard me.”
She turned off the running water and leaned against him. “No, I was lost in my head. What did you say?”
Nate leaned down and kissed her on the back of her neck. Mia shivered. No matter where or how many, his kiss always left her lightheaded.
“I asked what’s for dessert,” he repeated, kissing her again.
Mia turned in his arms, laughing. “That’s so cliché, you know.”
“What do you mean?” he asked with mock disbelief.
She rolled her eyes. “Oh, please. You say ‘what’s for dessert’ then I say something ordinary and then you say something cheesy like wanting me for dessert.”
He looked down at her, thoughtful. “Hmm, that does sound like something I’d say. But this hungry man could actually still eat.”
“Oh,” Mia said, a little embarrassed by her rash assumption. He was serious. Nate wasn’t a small guy and could honestly still be hungry. “Well…” she began lamely, “I don’t have anything else to feed you.”
Nate’s eyes sparkled. “Yeah, you do,” he whispered. He placed his hands on the counter to either side of her, trapping her between his solid frame and the sink. “I said I could still eat.”
Mia paused, confused. Then she laughed, recognizing the heated suggestion in his eyes. “You’re bad,” she murmured, shoving at his hard chest.
He leaned in closer, his lips only a breath away from hers. “And you like it.”

Lena Hart writes sensual romances with a hint of mystery and suspense. Together, her alpha heroes and smart, sexy heroines tell a story of incredible love with unforgettable passion. A Florida-native, Lena currently lives in New York City with her two calico kitties, Duchess and Daisy. When she's not writing stories of happily ever after, she's reading, researching, or conferring with her muse.

Scavenger Hunt Prize: the winner will get a “Forever Care Package” valued at over $100 (US entrants only), which will include a $25 Visa gift card, favorite items from the characters, and exclusive author swag.

If the winner is international he/she will receive a $50 Amazon gift card in place of the care package.

Secret Giveaways: Also, five secret prizes will be offered throughout the tour in five different blog stops. If you want to participate just follow the tour stops and find the secret giveaways!

November 28: I know that Book: Review