Saturday Morning Rec For The Weekend 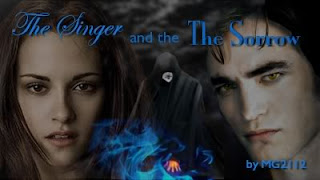 The Singer and The Sorrow by MG2112
http://www.fanfiction.net/s/5924138/1/The_Singer_and_The_Sorrow
Summary: Bella Swan is a graduate student drawn into a world of dreams. Edward Cullen is a beautiful immortal vampire. High in the hills of the Tuscany region of Italy is a town called Volterra that inexplicably links these two desperate lives.
Published: 4-25-10   Updated: 9-29-11  Chapters: 29  Status: WIP
Some times a story comes along that captures your attention with the summary alone. Some times a story is mentioned on Twitter, Face Book, or Tumblr. Sometimes the author is someone you follow on Twitter but don't really know their stories, you just like the person. For me, that is MG2112. She is one of the nicest people I have ever encountered on Twitter. We follow each other and she is always no nice and such fun to chat with. One of the first things I noticed is how she is always re-tweeting other writer's stories and updates as well as all the Fandom causes. She truly does represent the good in the Fandom.
The Singer and The Sorrow is a story that caught my attention with the summary. It seemed like a very different storyline with a more grown up Edward and Bella. I like that. Sometimes the teenager stories grate my nerves if I read to many of them. Upon reading chapter 1 to see if this was a story I would like, I was immediately taken with the intelligence of the writing. This was not going to be a story to read in between the multitude of others that I read. But I knew I wanted to read it and I knew I would have to give it my full attention. No lurking or catching up here and there when I can, your undivided attention is needed as the author is going to draw you in to her world, and not allow you to leave. And this was at chapter 1.
I am only a few chapters in, but the story has a mythical quality to it. There are also introductions to original characters which make the story that much more appealing and the sign of a true writer. Chapter 1 alone grabbed me. It just brought you right in to the story line and gave you the understanding that there would be mystery and suspense. This is an Edward unlike any other I have encountered. Not your typical brooding for the sake of brooding but a deeply troubled soul.
Except from chapter 2:

Carlisle, the Cullen family patriarch, slowly walked down the stairs into the dark basement, deep beneath the home's enormous garage. Though he could be silent in his movement, he purposefully made heavy footfalls as he went deeper into the cavernous underground room. He didn't want to startle his son.

"Edward? It's been such a long time since we have heard anything from you. Esme and I thought I should just check on you…. Edward?"

He stepped closer to the dimly lit corner where he saw the curled up ball that was his son, but this creature looked nothing like his beloved son. He set down the large bucket of rats and other larger rodents, and moved to pick up the "empty" bucket containing the carcasses of the drained animals. Edward sat on the floor, his face pressed into the corner. His hair was matted and dirty, his clothes were filthy, and what little of his face was visible showed the remnants of blood from the rodents he drank to survive… barely.

Crouching down to Edward's eye level, Carlisle sighed in quiet desperation. The writing on the wall he had cleaned only a few months ago was back, but this time it seemed as though it was carved into the wall. Filling every inch of space around Edward were the words, "I am nothing."

Truly a wonderful story. A very vamp story. A very intelligently written story. A story of mystery, suspense, drama, and romance. Can't get any better that that.
Definitely take a look and read the first 3 chapters before making any decision. I guarantee you will be completely drawn in and looking for more.